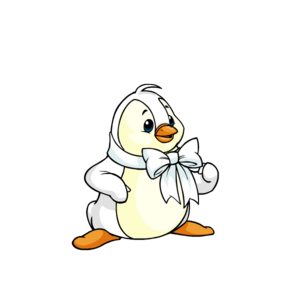 The Bruce is a feathered Neopet, with two large flat feet and a pair of stubby wings. Unlike other birdlike Neopets, it barely has a tail at all. Most Bruces wear the characteristic Bruce Bow, a smartly tied ribbon that complements their paintbrush colour, around their necks. At around 75cm tall, the Bruce is a medium-sized Neopet.

While Bruces can be found all over Neopia, their favourite home is the snowy foothills of Happy Valley, near Terror Mountain. They don't seem to feel the cold, and enjoy sliding and skating on the icy lakes and rinks. Bruces are highly competitive and love to show off, and you will often find them competing in skating contests like Rink Runner or facing one another in snowball fights. Despite their ungainly-looking bodies, they can be very graceful and agile in the right circumstances.

As far as we know, non-Faerie Bruces do not have the ability to fly. Instead, they use their wings for balance, adding to their finesse in skating and dancing.

The Bruce was introduced to the site on the 16th day of Storing, Year Two (known outside Neopia as November 16th, 2000). The surprise appearance of this cute little pet was compensation from TNT for the removal of an earlier "pet" from the site. A cartoony humanoid in a tuxedo and bow tie, the Bruce-Forsyth had been modelled on a TV presenter of the same name, but due to legal issues was unable to remain on Neopets.

To make up for the disappearance of the moustached "pet" from the site, TNT introduced the new creation on the same day. The first real Bruce was much rounder and more awkward-looking than the pet we know today, but we can recognise most of its important features (though the bulky body makes it impossible to see whether or not the tail was present). The new pet proved to be very loveable and didn't infringe anyone's copyright as a bonus. To this day, though, the species name "Bruce" and the bow around the pet's neck remind older players of a time long gone.