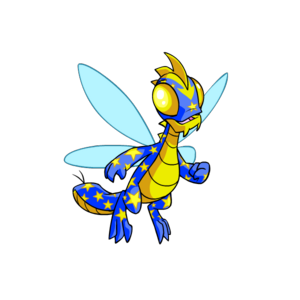 The Buzz is a scaly Neopet with two legs, two arms and four translucent wings. It has spiked ridges on its head and down its spine, a thick round-ended tail, and enormous pupil-less eyes set on either side of its head. It is a medium sized Neopet.

Buzz (the plural is sometimes written as "Buzzes", but even TNT are inconsistent on this point) seem to originate in Neopia's more tropical regions, as they love exotic tropical fruits like the Tigersquash. In fact, they may even stoop to stealing other Neopets' harvests of fruit if they have none of their own. They also seem quite fond of sticky, sugary treats, such as the famous Buzz-brand honey sold all over Neopia. They have excellent vision by both day and night, and are amazingly agile when in the air. While they can be quite fastidious about their appearances when the fancy takes them, they don't seem to be at all discouraged by dirt or bad smells. They are known to have the smallest teeth of all Neopets.

The Buzz has something of an odd history in Neopia. Its ancestor, the Fleye, was first introduced to the site on the 11th day of Sleeping, Year Two (known to non-Neopians as January 11th, 2000), based on artwork drawn by the winner of a site competition. The Fleye looked very different from today's Buzz, with wings similar in shape to the Uni's and long antennae; in fact, the only thing that has remained the same is the fact that both species almost certainly had excellent eyesight, the Fleye's single eye taking up almost all of its body.

On the 24th day of Swimming (July 24th) of the same year, the entire Fleye species underwent a strange mutation during a redraw. The new Buzz had razor-sharp wings and an oddly hunched spine, but otherwise was very similar to the Buzz of today. Its new name was probably intended to capture the sound of its fast-moving wings.