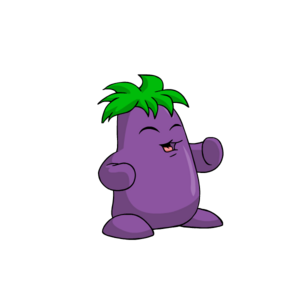 Chias are smooth-skinned Neopets topped with a fluffy crest of fur. There is no clear division between their heads and bodies, and their short, chubby arms extend from what would be a human's chin. Their slightly squashed oval shape is very distinctive (according to TNT, they look somewhat like living Neggs). They are medium-sized Neopets. However, Chias' shape and size can be altered drastically with the use of Magical Chia Pops, which transform any Chia eating them to resemble a fruit or vegetable.

Chias can be found in many parts of Neopia and seem to be native to Neopia Central. They are cheerful and very sociable creatures who make large groups of friends easily. Although their feet are not as large and suited for jumping as the hind paws of a Cybunny, they like bouncing up and down for fun, and trampolines are one of their favourite toys.

The Chia is one of the "prehistoric" pets introduced before official records of Neopian events were kept. It's well known that this species, and the Asparagus Chia in particular, was beloved by one of the founders of Neopia, Adam "Borovan" Powell, and Chias served as one of the site's most common mascots throughout Adam's tenure with TNT. The basic design of the Chia has barely changed at all over the years, with most of the redrawing effort going into making this awkwardly-shaped pet look more three-dimensional.