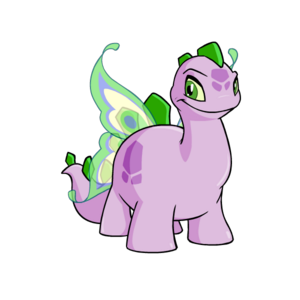 The Chomby is a smooth-skinned, probably scaly Neopet and a quadruped, meaning it walks on its four sturdy legs. It is easily recognisable by its long neck and the stiff plates that stick out from its spine. It is stoutly built, with a heavy tail. It is slightly taller than the average Neopet.

Chombies originate in the jungles of Tyrannia, which are filled with the thick vegetation this Neopet loves to munch. These pets have very large appetites and like to know where their next meal is coming from. Despite their formidable build they are actually quite shy and timid Neopets, but if you can once get past their shyness they are very accepting of new friends. For some reason, they have a phobia of the natural Tyrannian growth known as the fungus ball.

The Chomby was first made available to Neopians on the 22nd day of Running, Year Three (known outside Neopia as March 22nd, 2001). This immediately followed the discovery of their homeland, Tyrannia. Before this, the dusty land had been entirely inaccessible to the rest of Neopia. It took an earthquake to dislodge the frozen rocks of the Ice Caves and reveal a pathway to Tyrannia, after which a handful of curious Chombies wasted no time in seeking out their new owners. The design of the Chomby has changed remarkably little over the years, although the plates on its spine have shrunk somewhat.