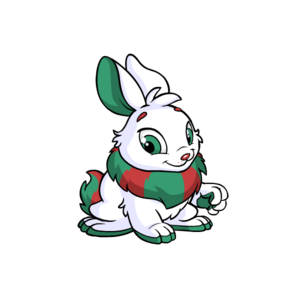 The Cybunny is a furry Neopet and a quadruped, meaning it walks (or, in this pet's case, bounds) on four paws. Its most noticeable features are its large ears and the ruff of fur around its neck. It has a small, fluffy tail and large, strong hind paws. Stood up at its full height, it is a medium sized Neopet.

While Cybunnies enjoy snacking on plants, they originate in the colder regions of Neopia, where their fur keeps them nice and warm. The white coat found on many varieties of Cybunny may have originally been a primitive camouflage against the snow. Having colder areas as a natural habitat may explain why Cybunnies are especially fond of winter root vegetables like carrots. They are playful creatures who like to bound and jump around.

The Cybunny was first made createable on the 10th day of Swimming, Year Two (known outside Neopia as July 10th, 2000), although one member of the species, the Easter Cybunny, had been seen around the site as early as April of that year. Its name was probably a combination of the words "bunny" (a childish term for a rabbit) and "cyberspace" (a popular name for the Internet in those days).

Cybunnies have remained one of the most popular Limited Edition Neopets on the site, with many players waiting anxiously for their chance to create one on Cybunny Day, though they can also be obtained from the Lab Ray or with morphing potions. The basic appearance of this lovable pet has not changed much over the years, but it has been fluffed out in several places and detail has been added, especially to the ears and eyes.