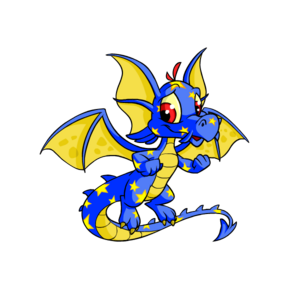 The Draik is a scaly Neopet that walks on two clawed feet. It is easily recognisable by its large ears (which are split into two parts, a little like those of the Acara), the whiskers sprouting from near its nostrils, and its wide wings. It has spiky ridges along its spine that reach down its long tail. It is a medium sized Neopet.

Draiks originally come from the kingdom of Meridell. Although there are morphing and transmogrification potions that can produce a Draik, they traditionally come from the enormous eggs that are found in dark, secluded places in their homeland. These eggs must be hatched at the Draiks' Nest, a secret place whose location has been passed down among Draiks for many years. Unfortunately, many in Meridell don't know the source of these huge eggs and only think that they would make a mountain of delicious omelettes... so if you see a Draik Egg in the Merifoods Shop, best to snap it up before it becomes someone's dinner!

Draiks are accomplished fliers who love to do aerial tricks and stunts. They like adventure, and quickly become bored with a quiet life. Wandering around Neopia, you may often see Draiks flying to and from Mystery Island for a bit of exploration. They are imaginative pets, and if left with nothing to do may end up play-fighting with imaginary enemies and plush toys.

The Draik was officially introduced to Neopians on the 25th day of Relaxing, Year Four (known outside Neopia as June 25th, 2002). Its name is similar to several older English words for the mythical creature we now know as the dragon. It was originally planned for this pet to be obtainable from the Creation Centre, and the first batch of Draiks was indeed released in this way. This is why, to this day, players refer to this pet as being Limited Edition rather than Restricted. However, the first Draik Eggs were sold on the 4th day of Gathering, less than three months later, and Draiks have hatched from them ever since. Their design has barely changed at all, going through only one redraw (in Year Nine).