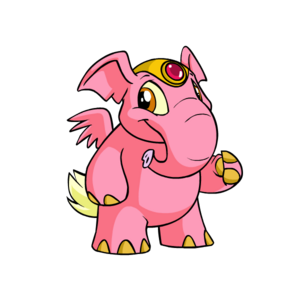 The Elephante is a smooth-skinned Neopet and normally walks on two legs. It is easily recognised by its long trunk and large ears, as well as its fluffy pompom tail and stout limbs. It has a small pair of wings on its back. These wings are not capable of flight, but Elephantes can use them to hover briefly. Most Elephantes wear the unique "Elephante Hat", a jewelled head-covering that no other species can wear. It is a larger than average species of Neopet.

Elephantes seem to be native to Neopia Central. They like travelling and taking in new sights, and are playful Neopets who enjoy competitive games with friends. They are mostly peaceful, but have surprisingly good aim with projectiles and enjoy the Battledome with a bit of practice. Surprisingly, they are fond of swimming, both as a fun leisure activity and a nice way to cool down on hot summer days. Nuts, and especially peanuts, seem to be a favourite snack of theirs.

The Elephante was introduced to the site on the 13th day of Sleeping, Year Two (known outside Neopia as January 13th, 2000). It seems from looking at old artwork that this pet was originally intended to walk on four legs, and the wings appear even smaller on the first Elephante than they are today. The ears have also got much larger over the years, and the hat is a later addition.

One of the last things to be changed in the Elephante's artwork was the silly, toothy smile it was given during an early redraw. The current Elephante has a more subdued expression, though it's still a happy pet.