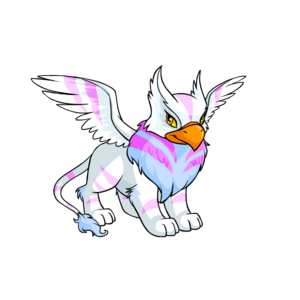 The Eyrie is a furry Neopet and a quadruped, meaning it walks on four legs. It is notable for being the only pet to have both fur and a beak; it can also be easily recognised by its very large wings, its two ear-like tufts on top of the head, and the ruff around its neck. Its long tail is somewhat weak-looking and probably has no purpose, either on the ground or in flight. The Eyrie bears some resemblance to the human legend of the Griffin. It is a taller than average Neopet.

Eyries originate in Neopia's tropical regions, although the pet was discovered before the introduction of Mystery Island by name. They are fierce and proud pets who will never back down from a challenge, but they also make playful friends and good training partners. Their large wings make them powerful fliers, equally competent on the ground and in the air, and Eyries are large enough to carry other pets on their backs during flight.

The Eyrie has a long and tangled history that shows just how drastically pets can evolve in Neopia's strange environment. Its first ancestor, the Cerpull, was discovered long before records of Neopian events were kept. This pet, however, looked nothing like the modern Eyrie; it resembled a winged Grarrl, with the small forearms and scaly body we've come to associate with that pet.

On the 13th day of Swimming, Year Two (known outside Neopia as July 13th, 2000), the Cerpull underwent a strange transformation. Nobody knows what caused this pet to mutate, but the change was quite dramatic. The creature that resulted was sufficiently different from the Cerpull that Adam and Donna gave it a new name: the Tatsu, after a Japanese word for "dragon". The Tatsu again resembled another Neopet, but this time, it was far more similar to the Shoyru. (Note the smooth, point-tipped wings, and the curves of the pet's body and tail.)

The new Tatsu was unpopular with many former Cerpull owners, who complained bitterly about the changes to their beloved pet. It seems that the mysterious transformation of the species was not finished, however. Early in Year Three, a poll was announced so users could help decide the fate of this pet. The Tatsu underwent another startling change, sprouting feathery wings in place of its scaly pair and losing the horns it had always worn. Perhaps the biggest alteration was the growth of fur, although many Tatsu owners also found the beak a surprise. The Eyrie had been born!

The basic design of this pet has remained relatively unaltered since its modern name, derived from an English word meaning "high mountain perch", was attached. However, it has been re-posed so that both its wings can be proudly shown off.