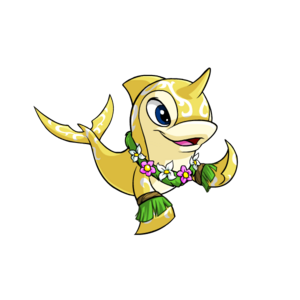 The Flotsam is a smooth-skinned Neopet. It has two flexible forefins that can be used as makeshift hands, and an elegant tail divided into two curved fins. It is notable for the horn on its forehead, which occupies approximately the same position as that of the Uni, but is smoother. They are a medium sized Neopet.

Wherever there are seas in Neopia, you will find Flotsams. Unfortunately their size makes them vulnerable to predatory pets like the Jetsam, but they are gifted swimmers and truly agile underwater. Subtle changes to a Flotsam's environment can alert it to potential danger before any other pet notices. It seems they have no problem breathing air, and aren't adversely affected by harsh climates such as that of Terror Mountain-exploration seems to be a favourite pastime of this species.

The Flotsam is one of the "prehistoric" pets introduced before official records of Neopian events were kept. Its name has remained unchanged over the years, and was originally taken from an English word that refers to something lost and floating at sea. The first design for this pet bears no resemblance to the Flotsam of today-its fins are tiny, its body round and bloated-looking, its lips puffed up and it has a strange green crest instead of the modern-day horn.

Later redraws added most of the features we're familiar with, but the Flotsam kept its swollen-looking lips for some time and briefly had foot-fins like those of the Jetsam. The tail has also broadened over the years.