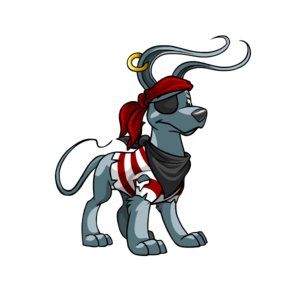 The Gelert is a furry Neopet and a quadruped, meaning it walks on four paws. It is easily recognised by its long, bendy ears and tail that end in sharp points. Like the Lupe, it has a large nose that presumably enhances its sense of smell, but Gelerts and Lupes are both said to dislike it when unwitting humans confuse the two species. Gelerts are medium-sized Neopets.

Gelerts are famed for their sense of loyalty and friendship. It's said that if you once make friends with a Gelert, he or she will never, ever let you down, no matter what it takes. They are quite athletic Neopets with strong, powerful legs.

The Gelert was introduced to Neopia on the 25th day of Sleeping, Year Two (known to non-Neopians as January 25th, 2000). At that time, it was a much chubbier Neopet than today, and wore a collar similar to the Aisha's. Adam and Donna initially named it the Polypup, and were very enthusiastic about its pointy ears and tail. The slogan adopted in the News was "It's like a puppy, but it's pointy!"

Later, the pet was redrawn to give it a more streamlined look and lengthen its ears. With the loyalty of the species becoming well-known, the Polypup was renamed Gelert. Since then, the basic appearance of the Gelert has remained much the same to this day.

The name "Gelert" comes from a Welsh legend, where a dog of that name was the loyal companion of Prince Llywelyn. The dog protected the Prince's child from a wolf, but Llywelyn saw only blood on the dog and that his child was missing. Thinking that Gelert had attacked his child, he slayed his devoted dog. After finding both the dead wolf and his child, safe, Llywelyn was filled with remorse, and buried Gelert with all the honors he could give.