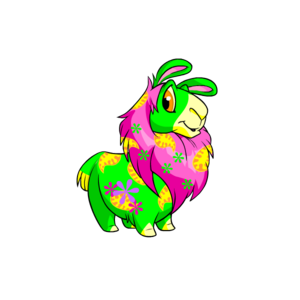 The Gnorbu is a long-haired Neopet and a quadruped, meaning it walks on four legs. It is notable for its very long, flowing mane and its large floppy ears. Unlike some Neopets with large manes (such as the Wocky) it does not have a bushy tail; the tail of the Gnorbu is smaller and more tassel-like. It is a medium-sized Neopet.

Gnorbu can be found all over Neopia. Their thick, long coats can become heavy if left to grow too long, and are traditionally clipped once a year, in the Month of Sleeping. They are cheerful Neopets with a great sense of humour, but they also care about the feelings of others and will never upset a friend just for the sake of a joke. Their physical strength and speed are not very remarkable, although, like all pets, they can become good Battledomers with sufficient training. Instead, Gnorbu are known for their patience, kindness and ability to see the funny side of even the most difficult situations. They are humble Neopets who don't show much arrogance.

The Gnorbu is a relatively recent addition to Neopia, having been introduced on the 6th day of Sleeping, Year Eight (known to non-Neopians as January 6th 2006). However, this was by no means its first introduction into the hearts and minds of Neopians. The concept art for this pet had appeared some nine months earlier, on April Fools' Day of Year Seven, as a joke that was never intended to be used. At this point, it was supposedly called the Lamameeah.

However, for once in Neopian history players proved themselves surprisingly open to creative new ideas. Owners all over the world demanded that something be done with some of the interesting designs they had seen on April Fools' Day. While some, like the Calabat, were used as new Petpets, life imitated fiction in the case of the Lamameeah and it was redrawn as a proper Neopet. There were several changes between the fake concept art and the real thing, not all of which pleased fans; the fluffy mane was made much more prominent, while the tail was shrunk. The ears were also made more floppy-looking, and the eyes were emphasised. All these changes can still be seen in the current design of the Gnorbu, which has barely been redrawn at all since that day.