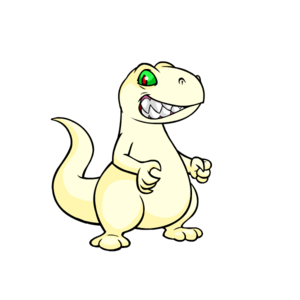 The Grarrl is a scaly Neopet which walks on two stout legs. Its most noteworthy feature is perhaps its enormous teeth, which are bared at every suitable occasion, but it is also easily recognisable by its short, slender arms (surprisingly feeble-looking in comparison to the legs), its long, strong tail, and its broad body. It has a powerful roar, which is echoed in its species name. It is larger than the majority of Neopets.

Grarrls can be found all over Neopia, though they have a strong affinity for Tyrannia, which may well be some kind of ancestral homeland for them. Anyone who has ever owned one of these pets knows that they can eat just about anything, and have a healthy appetite. They are very proud of their physical strength and battling prowess, and look up to famous fighters both from the Battledome and from tales of wars past. Grarrls place a high value on courage and ferocity, and do their best to make sure they are both fierce and fearless. However, if you manage not to be scared away by a Grarrl, they make loyal friends.

It has been said by none other than TNT themselves that the first pet ever to exist in Neopia was a Grarrl. Although this occurred before official records of Neopian events were kept, the pet is said to have come into existence "one morning in early November 1999" (more familiar to Neopians as the Month of Storing, Year One). The first Grarrl drawings show many of the features we know today but, oddly enough, are missing the infamous huge teeth!

The basic design of the Grarrl has not changed much in all these years, but the pose has been experimented with somewhat. Another early drawing shows the Grarrl apparently beating its chest, or possibly just scratching a nasty itch under its chin.

The current pose strikes a compromise between baring the Grarrl's ferocious teeth and allowing it a normal facial expression. Even if they are able to eat anything, it's more natural to think that Grarrls don't constantly wander around with open mouths.