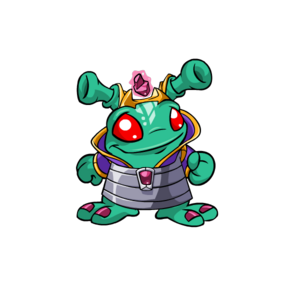 The Grundo is a smooth-skinned Neopet (its skin is sometimes said to be rubbery) that walks on two legs. It is notable for its enormous, pupil-less eyes, its two antennae with their round sucker-like ends, and the two large toes on each foot. It is a medium-sized Neopet.

Grundos have an interesting history, being the only species of Neopet to originate nowhere near Neopia. Their ancestral homeland is known as Doran; it's not known whether any other sentient creatures live, or lived, there. At some point many years before the human settlement of Neopia, Dr. Sloth kidnapped a large population of Grundos from Doran and brought them to his space station to use as fighters, programmers, mechanics and manual labourers. Subsequent lore has suggested Grundos originated from Kreludor instead—it is unknown if Doran is merely the Grundo name for Kreludor or not. Since Sloth was forced to retreat from the Virtupets Station, Grundos have learnt to mix with the other pets in Neopia, and can now be found just about everywhere on the planet. Unlike most Neopets, however, they still cannot be hatched at the Creation Centre. If you want a Grundo of your very own, you can either adopt one from the Pound or visit a special post at the Space Station, where one will be assigned to you. A small Grundo population has also established its own civilisation on Kreludor, Neopia's moon.

The Grundo is not an intelligent Neopet by nature (though this can, of course, be improved with plenty of homeschooling), but nevertheless endears itself to many thanks to its friendly and trusting nature. Soon after enslavement by Dr. Sloth, many Grundos struggled with Neopian language, often reversing words and sentences. However, this trait has largely now disappeared. Grundos are very impressionable, especially when young, and will try hard to appear "cool" in the eyes of their friends. They are adaptable Neopets who will work diligently at almost any task, and enjoy the unusual food created especially for space travel. For some reason, they have a strong affinity for the colour orange.

The Grundo was first available to own on the 24th day of Hiding, Year Two (known to non-Neopians as August 24th, 2000). This was no ordinary pet introduction—the Grundos available to adopt were actually Dr. Sloth's workers, escaping the Space Station en masse with the help of Neopians. The Space Faerie, Sloth's long-time nemesis, pleaded with selfless Neopians to take these fleeing Grundos home and leave Dr. Sloth understaffed. Thousands of enslaved Grundos did manage to escape, and the anniversary of this day is now celebrated as Grundo Independence Day.

The basic concept for the Grundo's design has not changed much over the years, but the pet has been redrawn to reposition its eyes (which were once set on the edge of its head, like those of the Quiggle) and better show the shape of its body. The antennae have also been widened.