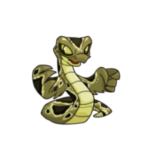 The Hissi is a scaly Neopet. It has no legs, but a long, smooth tail and two wing-like appendages with opposable thumbs. Other distinguishing features include its narrow eyes with their slit-like pupils, its forked tongue and pointed teeth, and the spotted markings on its tail, head and wings. Its onomatopoeic name is probably intended to resemble the sound of its serpent-like voice. It is a medium-sized Neopet.

Hissies (sometimes written Hissis) can be found all over Neopia. They typically slither from place to place, but their wings do grant them the power of flight, and where necessary they will use their tails as a spring to help them take off with a bounce. They have very sharp senses, and can always find their friends wherever they might hide. Hissies love stories of peril and adventure, whether they're making them up themselves or having them told or read by others.

The Hissi was introduced on the 4th day of Hunting, Year Seven (known to non-Neopians as May 4th, 2005), making it one of the more recent additions to the site and the 50th species of Neopet to be discovered. It has always been an LE pet, frequently released on its pet festival day. The basic design of the pet has not changed much, although the wings seem to have been smoothed and become a little less wild-looking.