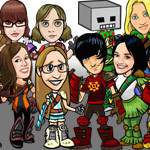 Humans are now generally understood to not exist within Neopia. Early on, however, there existed some crossover between the human world and Neopia - including the staff-centered Sacrificers and Ski Lodge Murder Mystery plots. The early appearances of some famous Neopian Characters—including Edna—showed them as human; they were later changed to match the Neopian world.

These days, humans appear exclusively in tie-in staff competitions, which are understood not to take place in the Neopian world canon. The primary recurring event is the Altador Cup Staff Competition, where Neopian users can guess who will win, and earn prizes based on how they do.

This page was written by Suzuka and last updated on April 20, 2019.