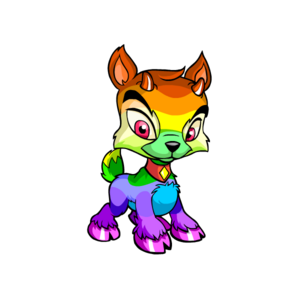 The Ixi is a furry Neopet and a quadruped, meaning that it walks on four legs. It can be recognised by its small pointed horns, tufty tail and large almond-shaped eyes. Its slender limbs end in shiny, solid hooves, and its face is framed by fluffy fur similar to the Acara's. Almost all Ixi wear the species-unique "Ixi collar", a ribbon band finished with a diamond-shaped gem, around their necks. The Ixi is a medium-sized Neopet.

The homeland of the Ixi is the lush fields of Meridell, where these pets can help themselves to as many vegetables and other plants as they like. They are graceful and agile creatures who like to skip and bound around the landscape. While Ixi are creative and playful creatures who are never boring to be around, their mischievous side may be something of a trial to unprepared Neopians.

The Ixi first appeared at the Creation Centre on the 11th day of Swimming, Year Four (known outside Neopia as July 11th, 2002). It's a mystery how these little pets got to Neopia Central, since their home land of Meridell wouldn't be discovered by Lisha and friends for another few weeks; still, time travel is a funny thing, so who knows? Perhaps due to the difficulty of persuading any large number of Ixi to travel across space and time, the pet was originally Limited Edition. Any hopes savvy Neopians might have had of hoarding the newest fashionable sensation in pets were dashed, however, as the LE status was lifted within the month. Remarkably, almost nothing in the Ixi's basic design has changed in more than half a decade, although its standard pose has been altered.