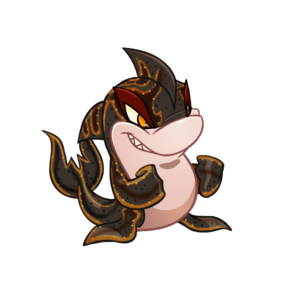 The Jetsam is a smooth-skinned Neopet with both a long, powerful tail (used both for swimming and balance) and two lower flippers that can serve the purpose of feet. They are easily recognisable as the only fish-like pet to walk in this manner, and for their large, sharp teeth and heavy-set eyebrows.

Jetsams are primarily aquatic Neopets, though they have no trouble breathing air; their species name is taken from an English word meaning something cast overboard at sea. Although, like all Neopets, they can eat vegetables and fruit without problems, they are naturally very fond of meat and evolved as predators. Most Jetsams today take account of the rules of civilised society and will not attack other Neopets, although they may still use their predatory reputation to intimidate others (the default Jetsam petpage makes the boast that Jetsams "enjoy hunting down the cute little Neopets and eating them for lunch"). However, they have no qualms about snacking on unfortunate Aquatic Petpets. The personality of the average Jetsam is quite spiky and hostile, but they can fight fiercely to protect those who have truly proven themselves as allies.

The Jetsam is one of the "prehistoric" pets introduced before official records were kept of Neopian events. It was always intended to be a fierce aquatic pet, but the earliest design looks far more like a piranha fish than the shark-like creature we know today.

The Jetsam was revamped in Y2, and many of the features we recognise in the modern pet were added. At this point, it still wasn't Limited Edition, the only LE pet at the time being the Peophin.

A poll was held the following year to refine the pet still further, and give it the streamlined appearance we're used to. This Jetsam looked far more formidable, and the piranha influences had definitely vanished by this point. The sinister reputation of the Jetsam was also firmly established at the same time, with the news that packs of Evil Jetsams had been preying on innocent Flotsams in Neopia's waters, making the Flotsam (yes, the Flotsam) temporarily Limited Edition.

However, the balance was eventually restored, and without the intimidating influence of their evil counterparts, Jetsams retreated from the seas. The species became Limited Edition in the summer of Year Three.