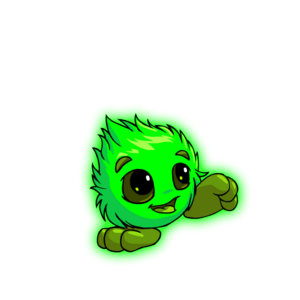 The JubJub (very often written "Jubjub") is a very fluffy Neopet, with two extremely large feet. It has no arms, but extremely flexible toes and a good sense of balance that allow it to use its feet for most tasks that would normally require hands or paws. It has enormous round eyes, but no nose. It is a smaller sized Neopet. JubJubs are known not to have knee joints.

JubJubs seem to be native to Neopia Central. They can often be very shy around strangers, and if feeling threatened will hide their faces behind their feet. If attacked, they will let out a deafening shriek that will startle their opponent enough to buy the JubJub some time. Surprisingly, then, they can sometimes be rather reckless thrill-seekers, taking advantage of their round shape to roll down hills, mountains and water slides, as well as doing parachute jumps from high places. In the wild, JubJubs seem to have large families, but they are just as happy living with a single human owner or a small Neofamily.

The JubJub is one of the "prehistoric" pets introduced before official records of Neopian events were kept. It was originally called the JibJib; the name change occurred because of a copyright issue. A Jib-Jib was a creature in a Fighting Fantasy Choose Your Own Adventure book. For the new name, TNT might have been inspired by a line in Lewis Carroll's Jabberwocky, the same nonsense poem that is quoted on the first page of the Gallery of Evil:

Beware the Jubjub Bird, and shun the frumious Bandersnatch!

So far, no Bandersnatches, frumious or otherwise, have been seen in Neopia.

The first JubJub (or JibJib) has a rather more serious expression than the one we're used to, but most of the features we know can be seen in some form in its artwork; the large round eyes, huge feet and fluffy body are all present. Later redraws would make the face more visible and redesign the fluff to look more like fur.