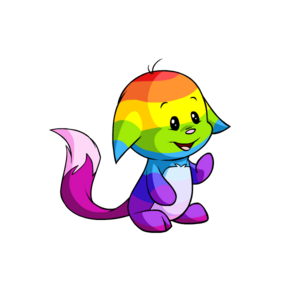 The cheerful Kacheek is a furry pet that walks on two small feet. It is well known for its friendly smile, as well as its pointed ears and fluffy tail. It is one of the smaller Neopets.

It seems that Kacheeks are rural pets by nature, liking to live in peaceful areas with plenty of grass and flowers. However, these days you will find some living in more urban regions like Neopia Central and Sakhmet. They are quietly friendly Neopets who prefer to avoid conflict if they can.

The Kacheek is one of Neopia's oldest species, having been discovered in the "prehistoric" time before Adam and Donna began keeping records of Neopian events. In those days, this pet was known as the Badeek. Its basic design has not changed that much over the years, although the earliest drawings unaccountably show it with three paws. Badeeks wore sunglasses perched on their noses, for reasons that have never been revealed.

The Badeek was renamed to the Kacheek in Year Two, and the sunglasses disappeared when the pet was redrawn. For several years now, the smiley Kacheek has been one of the most popular Neopets on the site.