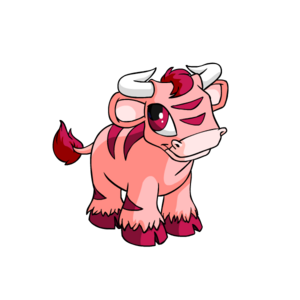 The Kau is a quadruped Neopet (meaning it walks on four legs) with a short coat, lengthening around the hooves and forming a tuft of hair on top of its head. It is easily recognisable by its large ears and horns and its stripy markings, as well as its shiny hooves. It is a medium-sized Neopet.

Kaus have travelled just about everywhere in Neopia in search of suitable places to settle. They are highly social Neopets who prefer to spend time in groups (a group composed entirely of Kaus is called a herd). They are kindly creatures who like bringing happiness to younger pets, and also love singing, although they tend to forget the words in their enthusiasm. Despite their gentle nature, though, Kaus also make good Battledomers, using their horns to spar with competitors. While they get on well with most other pets, for some reason Kaus seem to be irritated by Buzz, and may well smack them with their tail if they get too annoying.

The Kau was introduced to the site on the 26th day of Swimming, Year Two (known to non-Neopians as July 26th, 2000). Its surprise arrival was compensation for the removal from the site of an earlier prehistoric "pet", a humanoid creature based on the singer Macy Gray, which had to be taken down for legal reasons. (Among other things, we're sure Ms. Gray wouldn't have appreciated her sudden lack of feet.)

The new pet has remained popular and the design has changed fairly little since its first appearance. Its newer name is a homophone for the name of the common domestic animal, the cow, which is not, however, known for its singing.