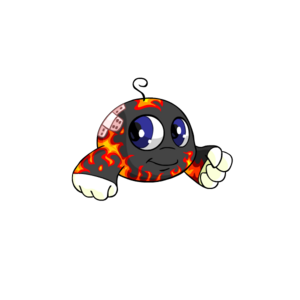 The Kiko is a smooth-skinned Neopet with a round body and two stout arms. It has no legs, but is very light, giving it the ability to move by floating and bobbing in both air and water. Kikos can also bounce on the ground, although this is not their normal method of movement. It's unknown why almost all Kikos wear a sticking plaster on their foreheads, but since it seems unlikely that all Kikos manage to bang their heads in precisely the same location during childhood, it's probably a species tradition rather than having any practical use. Kikos are smaller sized Neopets.

Kikos, appropriately enough, have an ancestral home in the beautiful clear waters of Kiko Lake. They do not adapt well to very dry atmospheres, and young Kikos especially need to be kept near water for their health. It seems that they, like many aquatic pets, are equally at home in fresh and salt water. They are playful creatures who like exciting thrills and spills like theme parks and water jets. From the selection of treats sold at Kiko Lake, it would appear that they also have a very sweet tooth.

The Kiko is one of the "prehistoric" pets introduced before an official record of Neopian events was kept (although Kiko Lake itself did not appear on Neopians' maps until Year Five). The first drawings of this pet are rather unfortunately flat-looking, but show all the features we're familiar with-the criss-cross plaster, single wisp of hair and saucer-like eyes.