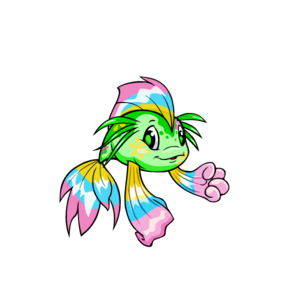 The Koi is a scaly Neopet. It has no conventional limbs, but uses its flexible forefins as makeshift arms. It is easily recognised by its filmy tail and crest, as well as the whisker-like eyebrows that extend on either side. It is one of the smaller Neopets.

Koi are native to Maraqua, both Old and New. They are highly creative and ingenious pets who love to apply their minds to new ways of solving problems; it was an unnamed Koi who invented the Utility Fish, tame sea creatures adapted for household tasks. Inhabitants of Maraqua since long-forgotten times, they are completely at home with underwater life and utterly unfazed by the local sea monsters like Chiazilla. They are quite attracted to treasures, such as the pearls and gems that can be found in the Maraquan ruins. It's uncertain exactly how they move on land; it's possible that they float like Peophins, but it's never been officially established. What is known is that they prefer to spend most of their time underwater, where their fins and tail allow them perfect manoeuvrability. If you don't mind visiting their aquatic habitats, Koi are highly outgoing and playful friends to have.

The Koi was introduced to the site on the 6th day of Collecting, Year Two (known outside Neopia as October 6th, 2000). Its name was taken from the Japanese word for "carp". Initially, it was not a Limited Edition pet. The natural disaster that destroyed Old Maraqua led to Koi being unable to find a suitable habitat to settle; it's not known where they went, but Koi have been harder to obtain ever since.

The first design for this pet is barely even recognisable as a Koi. The whiskers and translucent crest were present, but the tail was far more like that of a Jetsam, divided down the middle into two plain fins. The early Koi also had a much more pronounced nose, and what appears to have been a second set of fins on its lower back.

Initial redraws did little to change these oddities, although the forefins were reworked to look more realistic. There are still a couple of images of these ancient Koi scattered around the site, especially in old games.

Later redesigns drastically altered the shape of the Koi, and added its lovely spotted pattern around the forehead as well as removing the extraneous fins. The pet has remained more or less the same ever since, with the only adjustment being a re-pose to show more clearly how the Koi uses its fins to hold and carry objects.