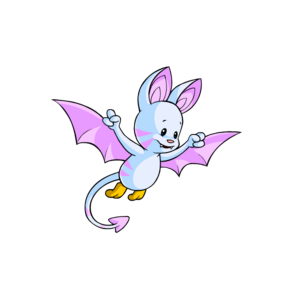 The Korbat is a smooth-skinned Neopet with two small clawlike feet and two large, leathery wings. It has very large, shell-like ears, a slender but strong triangle-tipped tail and crude opposable digits. Its small but sharp teeth are also noteworthy. It is a smaller sized Neopet.

Korbats are nocturnal by nature, although it doesn't harm them to be out during the day. Left to their own devices, they sleep upside-down during daylight hours, and awaken at dusk when most Neopets are winding down. Since darkness makes it hard to navigate, they use their exceptional hearing to help get a sense of where they're flying. Their wings are very strong, and beat fast when flying or hovering. If threatened, a Korbat will defend itself with its teeth and tail, but they are generally open and friendly Neopets when approached. Despite their resemblance to the human legend of the vampire bat, the majority of Korbats don't wish to harm anyone and certainly don't have a taste for blood. However, it is best not to anger Korbats as they tend to bear grudges.

The Korbat is one of the "prehistoric" Neopets dating from before official records of Neopian events were kept. The first-ever design for this pet gave it much bigger teeth and a fluffy head, and despite positioning the Korbat upside-down, there was no sign of the tail at all-perhaps the poor Korbat had to hold itself in place with its toes?