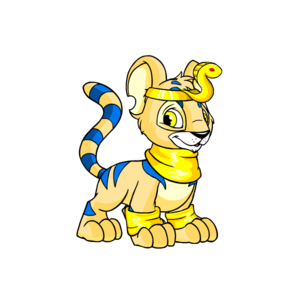 The Kougra is a furry Neopet and a quadruped, meaning it walks on four legs. Its main distinguishing feature is its long, striped tail; it also has very distinctively shaped ears, round with a small semicircular notch towards the base. Most colours of Kougra have stripy markings on their backs, foreheads and legs, and triangular patches of lighter fur around their eyes. The Kougra is a medium-sized Neopet.

Kougras originally come from the lush forests of Mystery Island, and even those born far away from the island like to visit it and explore. They are playful creatures who enjoy having mock-fights with their friends, pouncing with their large but soft paws. Many Kougras are very proud of their teeth, which are very sharp and shiny.

The Kougra was introduced on the 10th day of Hiding, Year Two (known to non-Neopians as August 10th, 2000). At the time, Mystery Island itself had just been discovered, and was still a very exotic and unknown land only reachable for a price. Apparently, TNT's working name for the Kougra was the Tigercub; the name it eventually ended up with may be a combination of "cougar" (a type of big cat) and "grrr". The first artwork shows all the features we're familiar with today, but has a rather one-dimensional appearance.

TNT's first attempt to make the Kougra look a little more professional was not a success, with many owners complaining about the pet's odd, spacey look. Some hasty tweaking was done, and the new design got the users' support. The Kougra hasn't changed much from this third model at all, and remains a very popular Neopet.