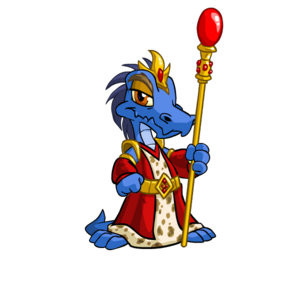 The Krawk is a scaly Neopet that stands on two large, flat feet. It is distinguished from other Neopets by the crest on its head, which falls down its neck almost like a furry pet's mane, and its jagged mouth. Unlike its fellow rare pet the Draik, it possesses no wings. It is a medium sized Neopet. The teeth of a Krawk are the second sharpest of all Neopet species.

Krawks originate, quite logically, from Krawk Island. While there are morphing and transmogrification potions that can produce a Krawk, traditionally these Neopets evolve from the Petpet of the same name when taken to the mysterious Fungus Cave. (Labbed Krawk Petpets don't count, as genetically they are not Krawks at all. Also, despite the name similarity, Krawks are no relation to the Petpet Krawkadon.) Full-grown Krawks are loyal to their owners, but nevertheless very mischievous Neopets who delight in getting into all sorts of trouble. Look no further than the regular population of Krawk Island to find out what sort of things unsupervised Krawks can get up to! While they can eat anything most Neopets enjoy, they also have a taste for the fungus that grows in the island's caverns and crevices.

Krawk Island was discovered on the 5th day of Gathering, Year Three (known outside Neopia as September 5th, 2001), but the existence of its native species somehow managed to remain a secret for another four months! The Krawk was introduced on the 10th day of Awakening, Year Four ("January 10th, 2002") as one of Neopia's only Restricted-status pets. Its appearance has barely changed at all since then.