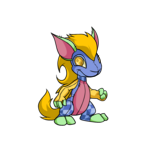 The Kyrii is a furry Neopet that walks on its two hind paws. It is easily recognisable by its large, pointed ears and the long mane that stretches down to its tail. It also has a naturally wide mouth that gives it a somewhat smug smile. It is a medium sized Neopet.

Kyrii are naturally sociable pets, and like spending time with their own species in groups as well as with other Neopets. They are very proud of their manes, and will not tolerate any dirt or damage to this precious part of their bodies. Although friendly, they are also very savvy when it comes to business, gossip and Battledoming, and pride themselves on not missing a trick.

Technically, the Kyrii is one of Neopia's "prehistoric" species, introduced before official records of Neopian events were kept. However, the original design for this pet is so drastically different that most people today would not recognise it as a Kyrii at all. It was named the Fuzio, and instead of having the sleek head-to-tail mane, was all fluff with only the eyes and mouth visible. In fact, it looked distinctly more like an ancestor of the JubJub.

The Kyrii as we know it was introduced to the site on the 9th day of Awakening, Year Three (known to non-Neopians as February 9th, 2001). It is believed there were some kind of legal issues involved with the drastic nature of the redraw, but whatever the reason, the paws and body of the Kyrii emerged from the fluff for the world to see, leaving only the mane untouched.

Kyriis have remained relatively unchanged in design to this day.

Kyrii harbour a mysterious allergy to apples. This extends to all foods with "apple" in their name, but fortunately excluding variants and hybrids such as the Azzle. The only exception is the Kyrii-specific Battledome item, the Kyrii Golden Apple of Healing. Kyriis who ingest any other apple-based food will come down with a case of the Itchy Scratchies.

There are a number of important Kyrii in Neopia; here are five of the most famous.