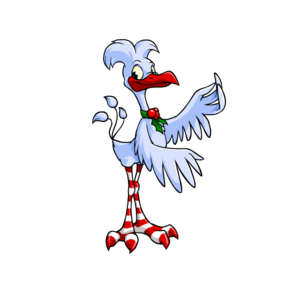 The Lenny is a feathery Neopet. It has two long, skinny legs that end in two-clawed feet, and two wide wings. It is easily distinguished from the other birdlike Neopets by its slender body, the parted crest on its head, and the three long feathers that form its tail. Although Lennies look tall because of their long, thin build, they are medium-sized Neopets.

It is a common misconception that Lennies cannot fly. While they prefer to spend a lot of their time on the ground, they are certainly capable of flight if the occasion demands it.

Lennies are very intelligent and curious by nature, and devoted from a very young age to learning and discovery. Many have the kind of mind that delights in solving puzzles for their own sake, and Lennies often prove to be very good at crosswords, mathematical conundrums and riddles. Their quick and logical minds also contribute to a natural talent for the theory of magic, and if put into practice this knowledge can make a Lenny very powerful. Their physical strength is less impressive, though like all pets, there is no reason why a Lenny cannot be a competent Battledomer with enough training.

The Lenny is one of the "prehistoric" pets discovered before official records of Neopian events were kept. Its long, thin neck and legs have always been notable, but its design has been redrawn several times to make it more visually appealing. The first Lenny design had flat feet rather like those of a duck, rather than the clawed toes visible on the modern bird. Its beak has also been reproportioned to balance the rest of its body.