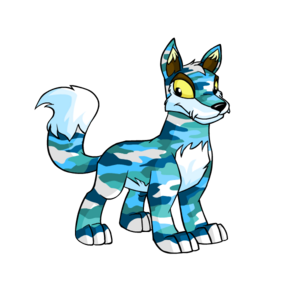 The Lupe is a furry Neopet and a quadruped, meaning it walks on four legs. Its face is somewhat like that of the Gelert, but there are many differences between the species, and neither pet likes being mistaken for the other. The Lupe's most defining features are its pointed ears and its fluffy muzzle, chest and tail. It is a medium sized Neopet.

Lupes can be found all over Neopia; while many live in urban areas like Neopia Central, they also have no trouble coping with a wilder, less comfortable life. They traditionally move around in groups (a group of Lupes is known as a "pack"), and even outside their species, tend to make strong networks of friends. Their loyalty is famous throughout Neopian history and legend. Lupes have no trouble seeing in the dark and like being out at night; a love of moonlight, in particular, seems to be in their blood, and it's not uncommon to see a Lupe gazing longingly at the full moon in the sky. The Haunted Woods are home to a strange variant, the Werelupe, which gains huge amounts of physical strength from the light of a full moon, and also walks on its hind legs at this time. Werelupes are much less reasonable and intelligent than ordinary Lupes, and have been known to attack unsuspecting travellers without warning. While all Lupes are swift runners and physically strong, they can also become very lazy and spoilt if not kept to a regular exercise regimen.

The ancestors of Neopia's Lupes seem to have lived a much harsher life than today's fortunate pets, sometimes having to kill and eat other Neopets in order to survive. At some point, Lupes developed a taste for the Chia, which does rather resemble a vegetable. Eating one's fellow Neopians is frowned upon in modern society, but many Lupes still like chasing Chias, play-fighting with Chia toys and snacking on Chia-shaped treats. Of course, outside the borders of civilised Neopia, all bets are off, and Chias are advised not to travel alone.

The Lupe was first available to own on the 13th day of Sleeping, Year Two (known outside Neopia as January 13th, 2000). Its name is probably related to the word "lupine", meaning "wolflike". It has remained a popular pet ever since its introduction, despite the rather odd artwork of its first incarnation, in which the poor pet is not only purple-whiskered but cross-eyed. Later redraws emphasised the proud bearing of the Lupe, as well as adding its characteristic fluffy chest.