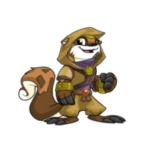 The Lutari is a furry Neopet resembling an otter which most commonly stands on its two hind paws, using its very large tail for balance. Its most notable feature is its huge claws, which help with swimming and climbing. It is a medium-sized Neopet. Lutari are equally at home on land and in the water. They may well be native to the island that bears their name, but very little is known about this region due to its inaccessibility, so the true connection between pet and island remains unclear. They are excellent swimmers.

The concept for the Lutari was drawn up and posted to the image servers well before its official release, and was originally known as the Mok. TNT have stated that this was always a working title and never intended to be the pet's actual name. The name "Lutari" itself seems to come from the scientific term lutra, meaning "otter". The first Lutari to be seen in Neopia proper was Mr. Chipper, the keeper of the ice-cream stall, who was released some months before the species' introduction. Players unaware of the concept sketches' existence wondered what he was, with some proposing a bizarrely misshapen Kyrii.

The Lutari was finally introduced properly on the 19th day of Eating, Year Eight (known outside Neopia as April 19th, 2006). Its design has not changed extensively, but has been adapted to show how the pet stands when on land (most owners' Neohomes not being underwater, Maraquans notwithstanding).

TNT intended Lutari to be createable mainly through their Neopets Mobile service, a means of accessing Neopia via one's mobile phone. Unfortunately, the idea of multimedia mobile phones was still catching on at the time Neopets Mobile was released. The service was limited to a handful of specific networks and phone models and was not available at all in many countries. With these limitations, it's not hard to see why the service didn't make much profit and was eventually cancelled. Since then, Lutari have only been released occasionally, mostly on their pet festival day. They were also originally the only species that could not be transferred or disowned in any way, until the species restrictions were lifted.