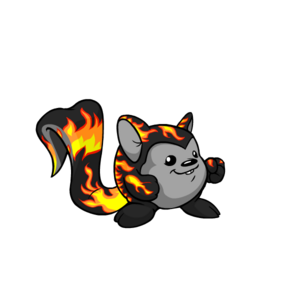 The Meerca is a furry Neopet that stands on two feet, though it can also balance on its tail if it so desires. It has very short legs, but makes up for this with Neopia's most impressive tail, which is long, thick and flexible. Its ears are large, while its eyes and nose are fairly small. It has two prominent front teeth which can be used for gnawing. Counting its tail, it stands quite tall; without taking it into account, the Meerca would probably count as one of the smaller Neopets.

Meercas seem to exist all over Neopia. They are pranksters with a wicked sense of humour, and their small size and dexterity make it easy for them to hide and move other pets' things. They are very proud of their long tails, and complain about having "bad tail days" where other pets might be concerned about their manes or ruffs. Surprisingly, despite their size, they are not always scavengers in the wild, and some Meercas have learnt to hunt for a living. They do, however, have a fondness for Neopia's most versatile vegetable, the Negg.

The Meerca was the fortieth Neopet to become available. It first appeared on the 7th day of Awakening, Year Three (known outside Neopia as February 7th, 2001). Earlier artwork emphasised the Meerca's tail, with the pet shown as bouncing off the ground. It's possible that its name may have been invented by analogy with the meerkat, a small African mammal from Earth, although the two don't look much alike.