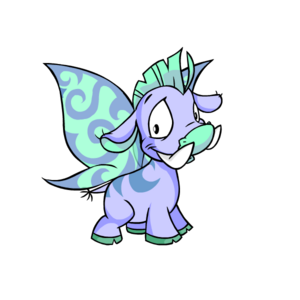 The Moehog is a smooth-skinned Neopet and a quadruped, meaning it walks on four legs. It is notable for its large, curved tusks and stubby snout, as well as its floppy ears. Its tail tapers off into a thin, frayed strand, and its hooves are small but sturdy. It has a hairy crest at the centre of its head, and quite large eyes. At around 95cm, it is larger than the majority of Neopets.

Moehogs originate in Neopia's mountains (probably not Terror Mountain, judging by their un-fluffy coats, there are other, smaller mountains as yet unexplored by humans, notably to the west of the Haunted Woods), where they originally worked as servants for lazy Skeiths. Their hooves are suitable for climbing and walking long distances, and they are capable of carrying heavy loads. However, they would much rather play games than work all day, and eventually left their ancestral home behind to seek a better life. They seem to like rural areas, and take pleasure in walking, jumping and playing in mud. When meeting others of their species, Moehogs will often start snorting contests and kick up dust clouds, but it's more for show than to be really intimidating. They seem to have kind hearts, and are easily moved by the plight of ownerless and homeless Neopets.

The Moehog was introduced to Neopia on the 5th day of Swimming, Year Two (known to non-Neopians as July 5th, 2000). It was originally a Limited Edition Neopet, and hopeful Neopians waited at the Creation Centre for the next small batch to be released. The LE status was lifted less than two months later, however. The first Moehog was remarkably similar to the pet we know today, but had smaller ears and was portrayed in an odd crouching pose. Due to an unfortunate perspective issue, its own tusk also appeared to be poking it in the eye.