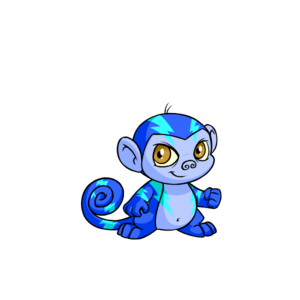 The Mynci is a short-furred Neopet and walks on two legs. It is easily recognised by its large ears and eyes, its unusual snout, and the very long curly tail that it can use for grasp and balance like a fifth limb. It is a medium sized Neopet.

Myncis seem to originate in jungle areas, where there are plenty of trees to climb and fresh fruit to eat. They have taken particularly well to the dense tropical forests of Mystery Island. Their natural agility and sense of balance makes them great climbers, but they are also surprisingly strong pets with sturdy arms and a tight grip. Myncis adore fresh fruit, especially the banana (and its Neopian relatives). While these fun-loving pets may get up to pranks, they do their best to stay away from Neopia's real dark forces and evil influences, traditionally promising to "see, hear, speak and eat no evil".

Myncis are one of a few species of Neopet who seem to have their own form of communication within their own species, in addition to the Neopian language that all Neopets speak. Nothing much is known about Mynci language except that it sounds a lot like "ooh-ooh, ee-ee" to those who don't speak it.

The Mynci was introduced to the site on the 29th day of Relaxing, Year Two (known outside Neopia as June 29th, 2000). It replaced a less-than-serious pet design drawn up by Adam, a cartoony doodle based on one of his friends and known as the Mellish. It's not known what Adam's friend thought of any of these developments, especially the prospect of being painted blue all over by random owners at the Rainbow Pool.

The design of the Mynci has changed quite drastically since it replaced the Mellish. While some of the features we're familiar with today, like the large ears and snoutlike nose, were present in the earliest artwork, the Mynci's characteristic large eyes and spiral tail were completely absent, and many parts of its body seem to have been bald. The first Mynci was also drawn in an oddly pensive, inactive pose for its species, something that later redraws would correct.