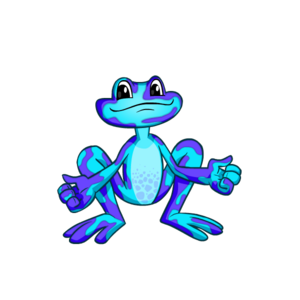 The Nimmo is a smooth-skinned Neopet that walks on two large, flat feet. It is notable for its strong, powerful legs, its wide mouth, and the long tongue it can extend at will. It is slightly taller than the average Neopet.

Nimmos can be found all over Neopia, though they prefer environments near lots of water. They are strong swimmers and quick thinkers, traditionally prizing intelligence as an important quality. The Nimmo has a strong sense of spiritual harmony and balance, and likes to feel peaceful and at one with his or her surroundings. They also have a surprising affinity for martial arts.

The Nimmo is one of the "prehistoric" pets introduced before official records of Neopian events were kept. Its design was being revamped as early as the autumn of Year Two, suggesting it must have existed for a long time before then. The first Nimmo is a little clumsily drawn and seems to have an odd dark stripe across the middle of its body, but most of the features we're familiar with are present (and a couple, such as the long tongue, that are less visible today can be seen clearly). The extended, fingers-touching position of its hands is a traditional one among Nimmos.