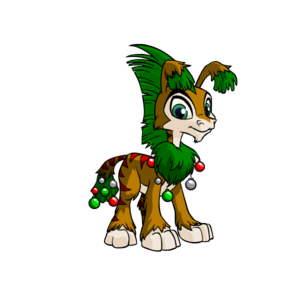 The Ogrin is a furry Neopet and a quadruped, meaning it walks on four legs. It is easily recognised by its stiff mane, the long thin neck ringed by a fluffy ruff, and its tassel-like ears and tail. Most Ogrins have stripe markings a little like those of a Kougra on their backs and hind legs. Unusually for a pet of its build and general shape, the Ogrin has paws rather than hooves. It is a medium-sized Neopet.

Ogrins seem to be found just about everywhere in Neopia. They are intelligent creatures filled with curiosity. Most Ogrins have a great appreciation for the natural world, both from an intellectual and an aesthetic viewpoint. However, they aren't quite so keen on camping out in the wilds, and the cosier and more luxurious the shelter or Neohome they can find for the night, the better. They can be rather shy in social situations, but once they've made a friend, they will talk freely and happily with him or her as well as going on walks together. Ogrins are a little clumsy with handheld weaponry, but if called upon to fight, can use kicks and headbutts to great effect.

The Ogrin is a comparatively recent addition to Neopia; it was discovered on the 27th day of Celebrating, Year Seven (known to non-Neopians as December 27th, 2005). For unknown reasons, its species festival day was later shifted to the 28th of that month. The pet's design has barely changed at all since then, although its default facial expression has become a little less severe.