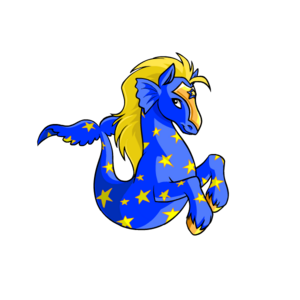 The Peophin is an elegant, graceful Neopet with two forelegs, ending in hooves, and a long tail that takes the place of hind legs. Its head resembles that of the Uni, but instead of a horn, the Peophin has fins that stick out from near its ears. It appears to have a very short coat, possibly fading into scales in the tail area, and a longer patch of hair that forms its flowing mane. It is a medium-sized Neopet.

While they have been seen on land, Peophins are far more comfortable in their natural habitat, the water. However, it is interesting to note that they only fully became aquatic creatures around 100 BN, presumably due to some sort of evolution. The last Peophin to have hind legs was born then, Rhian. However, aquatic Peophins existed at least as long ago as 1000 BN, so the two variants of the species existed side by side for some time. They are shy by nature, and deeply in touch with the magic that fills the world of Neopia. They use this magic to float on land when they need to.

The Peophin was first seen in Neopia on the 10th day of Awakening, Year Two (known to non-Neopians as February 10th, 2000). Initially, only 1000 were available to be created, making the Peophin the first ever Limited Edition pet. This pet would not be released to a wider public for another two months.

The basic concept of the Peophin's design has not changed considerably over the years, though the tail has moved and been reshaped a few times. The jewelled crest that runs from the pet's forehead to its nose has shrunk, while the mane has lengthened.