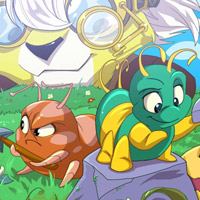 Petpetpets are tiny creatures that roam Neopia, considered by much of the world to be pests. Individual petpetpets will occasionally attach themselves to petpets, and will stay attached unless the petpet is removed from its Neopet. If that happens, they mysteriously vanish. Over the years, some people have begun to greatly enjoy petpetpets, and actively wish to attach one to a petpet. Petpetpets are fickle creatures, however, and it may take some time for one to choose to attach itself to a petpet.

Many Neopians, such as Eamann, still fight what they see as an infestation of petpets. Even among themselves, petpetpets do not always get along; a war between the Cooties and the Mootix has been immortalized in the game Cooty Wars.

This page was written by Suzuka and last updated on September 8, 2018.