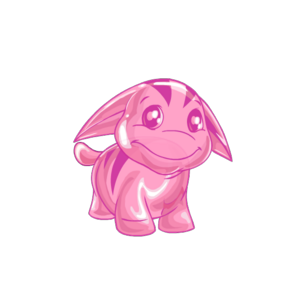 The Poogle seems to be a smooth-skinned Neopet, though some consider it to have very short fur. It is a quadruped, meaning it walks on four legs. Its most notable feature is almost certainly its ears, which are large and downturned. Poogles have naturally rounded, chubby bodies and very small tails. They are medium-sized Neopets.

Poogles originate in the cold northern regions of Neopia. They have sharp teeth, but don't seem to get into too many fights, and are well-known for their cute and cuddly appearance. They are good climbers and runners with something of a competitive streak, but they also enjoy card games, for which they have something of a knack. Not a lot is known about Poogles' origin; it's said that they are related to the Kacheek, which has similarly shaped ears.

The Poogle has its own species-exclusive lab colour, Malevolent Sentient Plushie (abbreviated to MSP). Good little Poogles are advised to avoid this colour, however, as it makes pets somewhat evil-looking and dangerous to know...

The Poogle was introduced to Neopia on the 14th day of Swimming, Year Two (known to non-Neopians as July 14th, 2000). However, its species festival, the Poogle Parade, takes place later in the year. The design of this pet has barely changed at all over the years, though it's been redrawn to look a little less lumpy and to have a more confident expression.