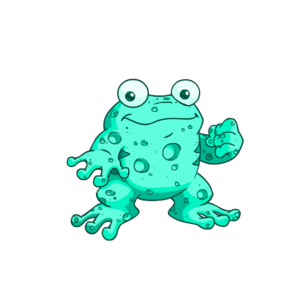 The Quiggle is a smooth-skinned Neopet and tends to walk on two legs, although its "hands" are very similar to its feet. It has a short and sturdy body, and is easily recognisable by its very large, round eyes, which sit on top of its head rather than lower down like those of most pets. Quiggles also have long, flexible tongues which can be extended at a moment's notice. They are a medium sized Neopets.

Quiggles are equally at home on land or in water, and like to have a bit of wetness in their surroundings. They are fun-loving Neopets who will seize any excuse to have a good laugh, whether it's splashing in puddles, bouncing around with friends, or telling jokes. Although Quiggles are capable of eating insects, and may well do so as a solution to being pestered by them, they much prefer fresh vegetables, and like to have a constant supply of these healthy snacks. For some reason, they appear to be allergic to cream, but not to milk, cheese or any other dairy product. Eating cream will cause a Quiggle to develop a case of the Neezles.

Quiggles have their own version of the Usuki phenomenon, known as the Quiguki Doll. However, it's not as popular with the public, and doesn't enjoy the wide exposure given to Usukis.

The original design for the Quiggle was called the Frogstomp. It was based on an entry into an official Neopets competition, and first appeared on the site on the 18th day of Eating, Year Two (known outside Neopia as April 18th, 2000). The Frogstomp didn't bear much resemblance to the Quiggle we know today; it barely had any limbs to speak of, and its feet were more like those of a duck. However, the saucer-like eyes we're familiar with were already in place.

The Frogstomp was renamed "Quiggle", for unknown reasons, in July of the same year. Redraws made it look less like a blob of jelly and more like a pet you'd be happy to have around the house! The Quiggle's basic design has remained fairly similar ever since, although its webby hands have grown and the mouth has shrunk somewhat.