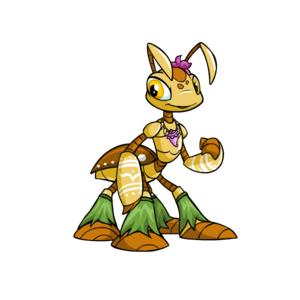 The Ruki is a six-limbed Neopet with tough plated skin. It is a quadruped, in that it walks on four legs, but it also has two thin arms ending in heavy pincers. Its lower torso is covered by a hard shell, and it has two large antennae sprouting from the top of its head. It is also notable for its very large eyes, which are mounted on either side of its head. It is a taller than average Neopets.

Rukis originate in the Lost Desert. They are tough and adaptable creatures who don't mind harsh weather or dry climate, and they make great travellers. They love exploring Neopia to see new sights, no matter how far their journeys take them. Rukis' tough skin serves as a good natural form of armour, and they enjoy play-fighting with their friends.

The Ruki was welcomed to Neopia on the 29th day of Swimming, Year Six (known to non-Neopians as July 29th, 2004). The pet design has barely changed at all since then, although the pet's talons have become slightly less pointed and been repositioned to hide its jumble of legs.

The Ruki for some unknown reason became a limited edition Neopet on the same day that Vandagyres arrived in Neopia, the 14th Day of Storing, Year Sixteen (14th November, 2014).