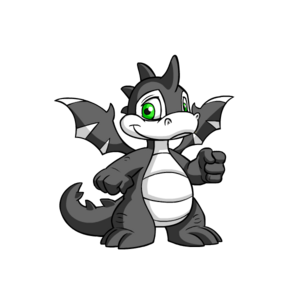 The Scorchio is a scaly Neopet that walks on two feet. It is easily recognised by its spiky appearance, with spines on its head, down its back and tail, and on its two wings. It has stout, sturdy legs. Its stomach, neck and face are of a lighter hue than the rest of its body. It is a medium sized Neopet.

Scorchios originate in the volcanic regions of Tyrannia, though these days they can be found just about everywhere. They love hot temperatures, and one of their most impressive tricks is blowing a jet of fire from their mouths. If you're looking for a Neopet with a friendly and open disposition and don't mind a lack of fluffy fur, then a Scorchio might just be the pet for you.

The Scorchio is one of the "prehistoric" pets introduced before official records of Neopian events were kept, although TNT's comments suggest that it was added in the very earliest days of the site. It has always been a popular pet-even the description of the Scorchio Plushies suggests they are more covetable than those of other species. However, a time traveller from Year One would be hard pressed to recognise today's pet as a Scorchio. The first drawings of this species make it look much more like a Korbat, with no separate upper limbs, a broad-tipped thin tail and small feet. It also, unaccountably, had a fluffy head of hair.

It took a drastic revamp to bring us something a bit more like the Scorchio we know today. The pet has remained more or less unchanged from then on, with redraws focusing on small details and repositioning.

The Scorchio is named after a sketch from the British TV comedy show The Fast Show. One of the sketches featured a fictional Spanish television station known as Channel 9, where the weather girl described sunny conditions as 'scorchio'.

This page was written by Dream and last updated on November 14, 2022.