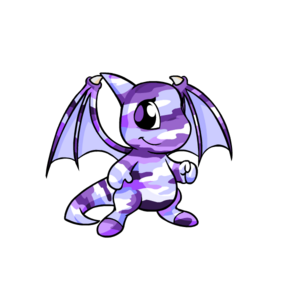 The Shoyru is a smooth-skinned Neopet which walks on two legs. It is easily recognised by its large wings, each tipped with a small bony point at the top, and the single fin-like crest on its head. Its tail is long and thick, and apparently used for balance when on the ground. Shoyrus tend to stand with their heads turned to one side, which gave rise to the popular misconception that they have only one eye. In actual fact, they have two, much like every other Neopet discovered to date. Shoyrus are medium-sized pets.

Shoyrus love to fly, spending a lot of time on the wing. They seem equally adept at flying by day and by night, although it seems young Shoyrus are not necessarily born with this ability and it has to be practised. They make rewarding friends, but can show a fiery temper if mistreated.

The Shoyru was first createable by Neopian owners on the 20th day of Eating, Year Two (known outside Neopia as April 20th, 2000). It's speculated that the species name might originally have been connected to the Japanese word "ryu", meaning "dragon". Despite having existed for so much of Neopia's history, the Shoyru has changed amazingly little in appearance. Every feature of its modern-day appearance can be seen in the early designs. The large, thoughtful eyes and graceful wings of the new pet proved an instant hit, and Shoyrus have consistently topped the species popularity chart for years.