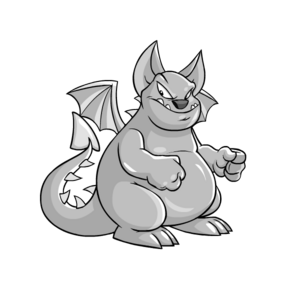 The Skeith is a scaly Neopet and can apparently stand on either two or four feet as it chooses. It is recognisable for its unusual build; unlike the manoeuvrable Shoyru, the Skeith's strength is its physical size and toughness, and all Skeiths are very solidly built with large bodies, tails and thighs. It has two small wings on its shoulderblades, spiky ridges down its spine, and a strong tail tipped with a triangular plate. It is also notable for its large ears and obvious underbite. At around 90cm, it is taller as well as broader than the average Neopet.

Skeiths seem to exist all over Neopia. Predictably, they are known for their strength, which has both combat and work applications; Skeiths would seem an obvious choice for manual labour jobs. However, despite their physical ability, they are naturally quite lazy and happily delegate tasks to other Neopets while they relax.

Many people are surprised to find out that despite the tiny size of their wings Skeiths can fly when necessary, although they lack the aerial agility of the smaller flying pets. Skeiths often like to hoard valuable things, and a desire to earn Neopoint treasure can become adequate motivation for this otherwise lazy pet to do a day's hard work.

The Skeith needs to eat a lot to keep its body in good condition; thanks to its large teeth and good digestion, it can stomach just about any type of food (including things that most Neopets wouldn't consider edible, like rocks and furniture). Newcomers to Neopia sometimes think that Skeiths need to be put on a weight-loss diet, not knowing that the solid build of the pet is natural and that there is no such thing as a thin Skeith. However, there is one thing Skeiths cannot stomach; they are all allergic to cheese, and will become sick with Neezles if they are fed any.

Skeiths are one of Neopia's oldest species, having been introduced in the "prehistoric" era before there was an official record of Neopian events. The design of the pet has remained fairly consistent over the years, but the standard pose has changed several times (and cosmetic alterations have been made, such as the removal of the cross-eyed expression and a slight shrinking of the teeth). The tail has also broadened.