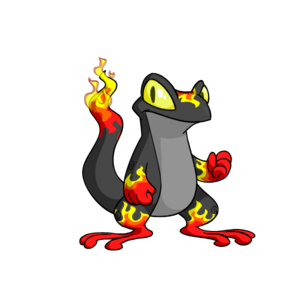 The Techo is a scaly Neopet that walks on two three-toed feet. It has a long, sturdy tail and very large eyes, positioned on either side of its head. It has markings on its face that contrast with the colour of its skin. It is a medium-sized Neopet.

Techos seem to originate in Neopia Central. They are laid-back creatures who never feel guilty about relaxing, and enjoy lazy days outside doing nothing. Most Techos do not get disheartened easily, and are the first to try and cheer up more morose friends with jokes and silly acts.

The Techo was first available to create on the 7th day of—quite appropriately—Relaxing, Year Two (known outside Neopia as June 7th, 2000). However, this is quite close to a number of other festivals, which may be why their species celebration was moved to the Month of Gathering. The basic design of the pet has not changed much over the years, but the first Techo drawings showed them as oddly serious-looking for such an easy-going pet. Later redraws rectified this, while still keeping almost all the pet's key features remarkably intact.