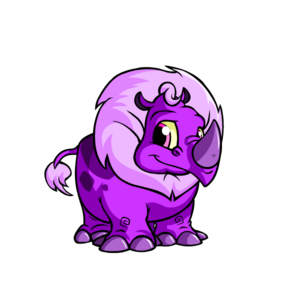 The Tonu has leathery skin and is a quadruped, meaning it walks on four legs. Its most notable features are the enormous ruff around its head, the horn sprouting from its nose, and its thick, sturdy legs. It has comparatively small ears and a tiny tufted tail. It is a medium-sized Neopet.

Tonus are native to Tyrannia, where the warm climate helps nurture them in their eggs. They are boisterous Neopets who love running around and playing ball games, even if they knock things over in the process. They have large appetites, but may be tempted to overeat if not careful. Although they live in Tyrannia, Tonus are not at all keen on the national speciality, sun-baked omelette, and your best chance of creating one outside of pet festival days is to wait until there is absolutely none left in the whole country.

The Tonu was introduced to the site on the 21st day of Awakening, Year Four (known outside Neopia as February 21st, 2002). The basic design of the pet has not changed very much over the years, although today's Tonu appears a lot less timid than its earlier counterpart.