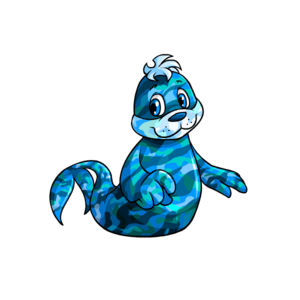 The Tuskaninny is a smooth-skinned Neopet, with two large forefins and a fishlike tail. It has a small patch of fluffy fur on top of its head, and is also noticeable for its large nose and freckled face. It is a medium-sized pet.

The Tuskaninny is an aquatic Neopet by nature, and a good swimmer. While it can move around on land quite freely, it likes being near water. They are playful pets, who enjoy being out in the sunshine, and good learners. While quite willing to take to any new subject, including Battledome training, they are less fond of conventional competitive sports, due to moving more slowly on land than pets with legs.

Tuskaninnies are among the "prehistoric" Neopets released before Adam and Donna began keeping records of Neopian events, so their actual date of introduction is unknown. They were originally drawn with bodies almost as round and bulky as that of a Skeith! Later revamps streamlined their form to make more sense for a swimming Neopet, as well as lengthening what had previously been very feeble-looking fins.

Tuskaninnies have a unique language of clicks and whistles that they use to communicate with each other in secret, known as Tuska. However, this language does not appear to be based on any unique physiology to Tuskaninnies as other species are capable of learning it.