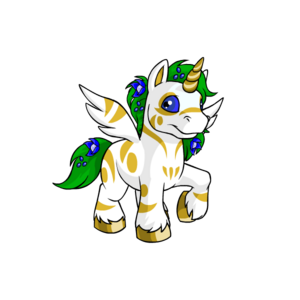 The Uni is a quadruped Neopet (meaning it walks on four legs) with a short coat, lengthening around the hooves and at the mane and tail. It is easily recognised by the twirled horn on its forehead, as well as the two small wings at its shoulderblades. At around 120cm, it is one of the larger Neopets.

Unis can be found all over Neopia. They are well-known for the pride they take in their appearance and can spend hours on grooming and choosing accessories. They are also very inquisitive pets who like to know everything that is going on around them. Their wings are not only for show; they are just as graceful and agile when flying as they are on the ground. It would appear that many Unis have a distinct sweet tooth and like the taste of chocolate, candied Neggs and other sugary treats.

The Uni is one of Neopia's oldest species, dating from the "prehistoric" time before official records of Neopian events were kept. Its name derives from the mythological creature known as the unicorn, which was very similar to the modern-day Uni but was not normally portrayed with wings. Its basic design has remained the same over the years, but it has been drastically re-posed to make it appear more three-dimensional and realistic. The earliest drawings, with the Uni somewhere between sideways- and forward-facing, are reminiscent of Sakhmetian or Egyptian paintings—this was probably not intentional.

Despite these big improvements, a significant minority of Neopians were horrified by the pet's various redraws, claiming that they made the Uni look more childish and cutesy than before. The overall impression was favourable, though, and no Uni since has ever had its head twisted to one side.