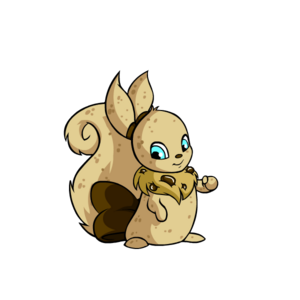 The Usul is a furry pet that walks on its hind paws. Its most prominent features are its large, fluffy ears and tail, which are often kept tidy with ribbons, and the ruff of fur around its neck. While it bears several similarities to a squirrel, it stands up straight without the forward-hunched posture that squirrels adopt. It is a medium-sized Neopet.

Usuls are very social creatures who originally lived in trees. They have a strong affinity with their friends and communities, and are quite sensitive (some might say vain) about their outward appearances-spending lots of time and effort on grooming is common for Usuls. Because of their warm, fluffy fur, they adapt very well to cold climates, and are often found engaging in winter sports in the Terror Mountain region (Usul Day is marked by the start of their skiing championships).

The Usul is one of the "prehistoric" Neopets discovered before official records of Neopian events were kept. Its appearance has changed remarkably little between Year One and the present day. The major change has been in the colour of its fur; many Usuls nowadays display their paintbrush colour only on their ruffs and ribbons, whereas every Usul's colour once extended across its whole body.