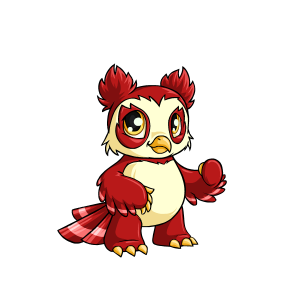 The Vandagyre is a feathered Neopet that stands on two feet, though they are also capable of flight. They have claws on both arms and feet, and large eyes.

Vandagyres exist all over Neopia, but only recently came down from their mountainous habitats. They are known to be a very wise species, and can often be found reading, gardening, or having tea. They have an extreme fondness for foods containing nuts of all varieties. It appears that certain Vandagyres worship an object or being known as the Great Feather, and can often exclaim "By the Great Feather!" in surprise.

The Vandagyre was the 55th Neopet to become available. It first appeared on the 14th day of Storing, Year Sixteen (known outside Neopia as November 14th, 2014). Being such a recent addition to Neopia, its artwork has not changed at all since release. Vandagyres seem to be rather picky about what clothing they will wear, only being able to put on wearables released after the date on which they were revealed to Neopia.

For some reason, the arrival of the Vandagyre caused the Ruki to become a limited edition species, as both events happened at exactly the same time.

The Vandagyre was named as the result of an internal suggestion contest among the Neopets Team. The winner had suggested the name Vandagyre as a reference to the gyrfalcon, as the staff member was a fan of the species. The Vandagyre's pet day, November 12th, was decided as a tribute to the birthday of that staff member's late father.

This page was written by Herdy and last updated on November 14, 2022.