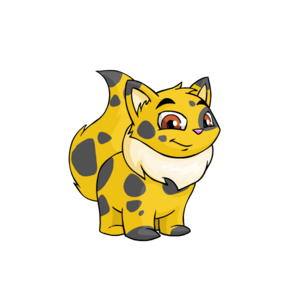 The Wocky is a furry quadruped Neopet, meaning that it walks on four paws. It is easily identified by the warm, thick ruff around its neck, similar to the Usul's, and its large, fluffy tail. The normal colour of a Wocky's ruff is pink, although some paintbrush colours may alter this. It is a medium-sized Neopet.

Wockies are not native to any specific region of the world, having a keen sense for exploration and a coat that keeps out most kinds of harsh weather. "If you want to have lots of adventures," the Cliffhanger game advises, "adopt a Wocky." They apparently have a heightened sense of smell, something that would be hard to guess looking at their small noses, as well as very sharp visual perception and good hearing, making them all-round alert and observant pets.

The Wocky is one of the "prehistoric" pets introduced before official records of Neopian events were kept. Its first redraw took place in Year Two, suggesting it must have been around for some time before that. Interestingly, TNT for some time confused the predatory habits of the Lupe and the Wocky; they knew that one pet was in the habit of eating Chias but apparently had not yet decided which it should be. The site references to Wockies chasing Chias have been removed, but you may still find one or two in the very oldest issues of the Neopian Times.

The basic design of the Wocky has changed fairly little over the years, but the ruff has shortened and more fluffy fur has been added to the brush, which in the earliest art looks like the Aisha's thick but sleek tail.