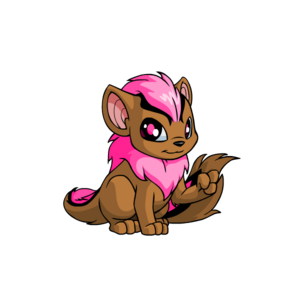 The Xweetok is a furry Neopet and a quadruped by nature, meaning it walks on four legs, although it is capable of standing and walking on only its hind paws if necessary. It is easily recognised by its fluffy ruff and mane, which stretches down its back to the tail, and by the curved black markings on its forehead. It has distinctive large, dark eyes. At about 25cm, it is one of the smallest Neopets.

Xweetoks originate in Neopia's temperate forests, where they live sheltered by thick roots or hollow trees. If there are no suitable shelters around, they will dig burrows as temporary lodgings. During the winter months, though, they're very glad of a cosy Neohome to curl up inside. They are quick and lively pets who love playing energetic games like tag, but somewhat sore losers, especially in the Battledome. Most Xweetoks are also very open and friendly creatures, who like having friends of many species, both Neopet and Petpet, and really enjoy the attention of others. It's not uncommon to see a Xweetok in the spotlight-shyness is not a common attribute for this species. They have something of a sweet tooth, which draws them to nuts and berries in the wild (and the rather less nutritious treat of jelly beans when living in the city).

Xweetoks are one of the more recent arrivals in Neopia, having been discovered on the 30th day of Storing, Year Seven (known to non-Neopians as November 30th, 2005). Their pose has been altered somewhat, but the basic design of the pet has remained virtually untouched since then.